Created in 2018 from discarded objects found on the streets of Youngstown, Ohio

After a tap on the snout, the skull and jaw will move and bob for over 3 minutes.

Most of my life was lived prior to the onset of high technology and the Internet. After spending the last 15 years involved with these technologies, I have become deeply disenchanted with them. Their promises are hollow and they have created a deep sense of unease in me.
Some of my time is spent stripping metals from these discarded technologies and selling them as scrap for extra money. There is something so depressing about the pile of cracked plastic, broken glass and mangled motherboards. At times I feel as if I am butchering the remains of a strange biotech animal.


My studio is located in downtown Youngstown, Ohio. It is about 900 square feet. Here I create large oil paintings and sculpture, operate a wood shop and wood fabricating area, and store finished work, supplies and tools. I recently acquired thousands of board feet of high quality tiger maple and cherry wood from a large woodworking facility in my neighborhood that went out of business. The wood is very expensive if purchased commercially, and to my good fortune, I found it in a dumpster.

The clamping area is where I glue and clamp the cut wood for frame making.

The staining area is where I create and apply a variety of custom made stains to the wood.

The framing area is where the mitered custom frame mouldings are assembled using corner clamps.

Astronaut Alan Bean and the Alien 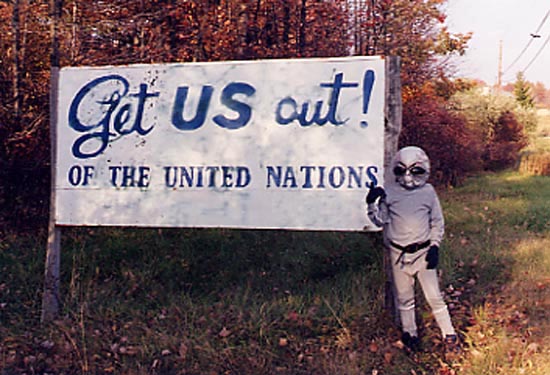 Wayyyyyy back in 1999 my sister was going through a divorce. She suggested I spend some creative time with my nephew as he was about 9 years old and struggling a bit. Being the artist I am, I decided to dress him up like an alien and take him around the western Pennsylvania countryside on a photo shoot. It was quite an adventure. Above is my favorite photo of the series.
Forward to 2004: I was working at the Butler Institute of American Art as a security guard. It was there I met Apollo Astronaut Alan Bean, one of the first men to walk on the moon. An accomplished artist who paints moonscapes, he was doing his first major solo exhibition. He spent a week at the museum prior to the grand gala opening of his show. Each museum worker was provided the opportunity to meet him individually. I spent a half hour alone in a conference room with him talking about art and what-not. Truly an amazing man, with a glow, so to speak. I had never met anyone quite like him. He took a keen interest in everything, as if he thoroughly enjoyed life and was constantly drinking in the sweetness that surrounded him.  I was in awe and it occurred to me that he was as close to a true Saint as I would ever meet. During a lecture he gave at the museum, he described what it was like to see the Earth from space and the powerful spiritual effect it had on him.
Finally the night of his art opening arrived. It was attended by many wealthy and powerful people from around the country. CEO's from major corporations flew in. The parking lot was packed with Lamborghinis, Jaguars and every high end luxury car you could imagine. It was my job that night to help these people park in the small, cramped lot. I had to spend the entire evening outside, and as event began to wind down I helped people into their cars and directed them to the street.
Some people in Youngstown refer to me as an 'unapologetic self promoter'. Ah well, perhaps I deserve the title.
I could see Alan and his daughter in the museum foyer putting on their coats and preparing to leave. I knew they were catching a flight out of town that night. I rushed in, grabbed a folder I had hidden, ran up to Alan and blurted out "Mr. Bean! I have photographic evidence that ALIENS exist!" and thrust the folder at him. Oh MY God ! The look on his face! The daughter's jaw literally dropped. They stared at me, frozen, apparently afraid to move.
Slowly Alan reached out and gingerly took the folder from my hand. He held it for a second, took a deep breath and opened it. A huge smile spread across his face. Inside was the photo above. I said "Mr. Bean, meeting you was one of the best things to happen to me in my life. Thank you for coming to Youngstown to share your work." He shook my hand, started to laugh a bit and said he was going to frame the photo and hang it in his office. Then they thanked me, walked out the door, got into a waiting car and disappeared into the Youngstown night.

The Fishing Cat Banner was sponsored by Iron and String Life Enhancement of downtown Youngstown. The image was taken from a painting I made several years ago.  Check out the great article by ISLE   HERE 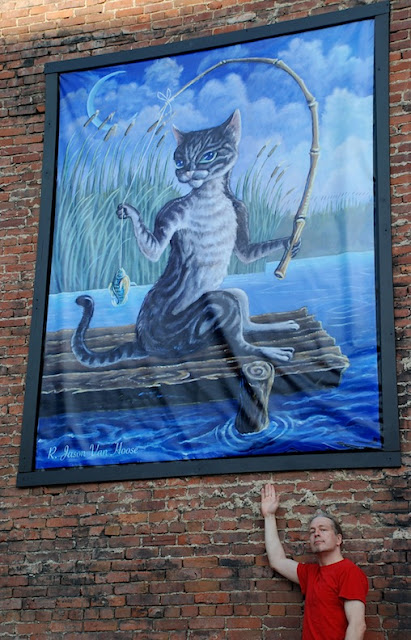 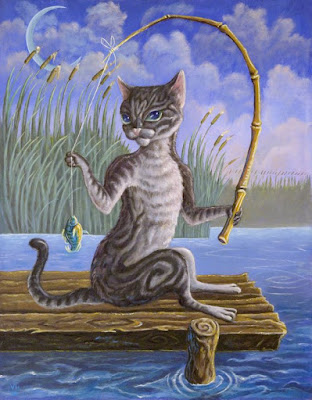 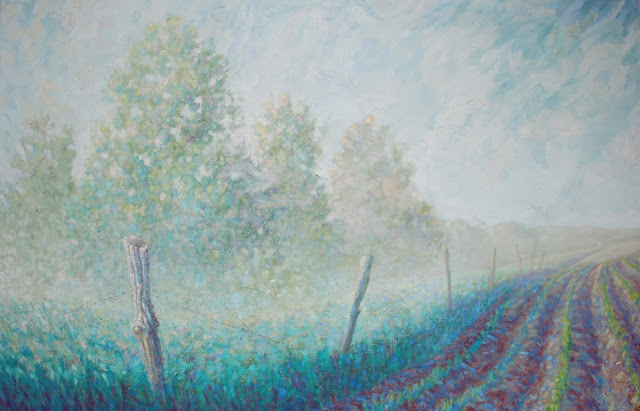 This year's auction will take place at the Columbus Museum of Art on September 24th, 2016.
Art For Life Fundraiser is considered to be the most prestigious cultural event in Columbus and I am very pleased to be involved.
VIP ticket price $350.00. Purchase HERE
Great article from Sotheby's about Pizzuti Collection HERE

Connecting New Young's Town to the suburban areas are streets,  artifacts, left from the Dead City of Youngstown. They are used as secondary or tertiary routes.  Market Street for example, is perhaps the longest, being many miles in length and traversing the Wildlands. Currently, the majority of the buildings along it are being claimed by nature or the voracious demolition companies. Travel merely one block to either side of market for anywhere on its entire length and there is nothing but fields and woodlots with the occasional fragment of a neighborhood.
At the point where these corridors meet the suburban areas one will find neighborhoods from the Dead City still intact, almost like illusions. The houses are neat and tidy, the streets are clean and maintained, there is police protection and all seems right with the world. There is a sense that the American Dream is still alive, right here where we are standing. We feel the pressures and threats around us, but we know we can withstand them. After emerging from the Wildlands, this area is a relief. This is the mood of the neighborhood. We see this environment particularly where Market Street meets Boardman boarder.
Should a person only visit these neighborhoods, they would have   the impression that the dead city of Youngstown is still alive and well. The fact of the matter is that these border communities are totally dependent for their survival on the suburban economies, and without the regular infusion of resources, they would collapse and be taken by Ruralization.

Visit my WEBSITE
Posted by jason at 1:03 AM No comments: 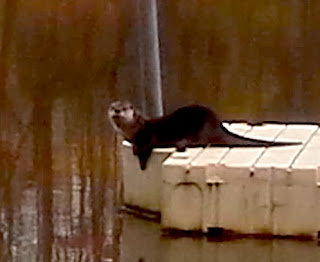 Mill Creek Otter several months  before it was trapped 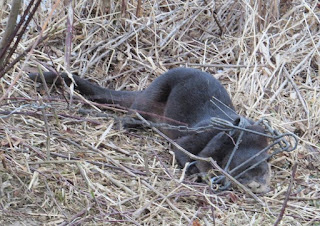 A few weeks ago the Mill Creek Otter was caught in a Conibear killing trap in the Lake Newport Wildlife Sanctuary. The perpetrator, Daniel Volpe, had permission from the park managers to trap 'nuisance beaver' and muskrat. However he engaged in   illegal trapping  activities, including setting several Conibear traps on land, which led to the horrific maiming and assured death of the otter. Volpe was cited, appeared in Canfield Court, and was fined $240.00.
Conibear traps  for beaver are incredibly powerful and are designed to crush the animal's skull, neck, spine and rib cage. They can break a grown man's arm and smaller sizes can break fingers. In a sense, these traps are humane, because, if set properly the animal is assured a quick death. Proper setting involves submerging the trap in water so that the animal drowns as well.
The Oldster managers of Mill Creek Park have outdated, dangerous views on the animals that inhabit the park. They use labels like Nuisance Animals, Diseased Animals, Invasive Species and Overpopulation to instill fear in the public and create an atmosphere of conflict between the animals and people. The park managers then engage in wholesale slaughter of large numbers of these creatures based on fear, faulty reasoning and outdated, game management practices. Additionally many 'non-target' non nuisance are most likely trapped as they inhabit the same environs a the muskrat and beaver. The Otter is the obvious example, as are other creatures such as herons, mergansers and mink which hunt for fish in beaver and muskrat burrows.
With advent of the internet, Social Media and digital photography, the animals of our Park are now international celebrities. The photos above have been seen by hundreds of thousands of people locally and worldwide. Thousand of people travel yearly to the park, specifically to enjoy and photograph the animals of the Park. These creatures are accepting of humans and daylight. They feel safe, and people can get close to them for clear photographs and general enjoyment. Bald Eagles, Large Whitetail Bucks, Otters, Mink, Foxes, Coyotes, Wild Turkeys, Owls,  Herons, Raccoons are regularly seen at close range in the park.
The animals have become ambassadors for our community,  particularly the community of New Young's Town. International business people, when seeing the Bald Eagles, are instilled with a sense of confidence about our community. Families wishing to move here view the animals as valuable educational tools for their children.
These animals are our friends who make us money and create a good reputation for our community. They are Community Treasures and should be treated as such.

* For the record, I spend time nearly every day in Mill Creek Park,  I grew up on farms, spent much time hunting and trapping, and majored in Environmental Sciences at Ohio State University for 2 years.

Visit my WEBSITE
Posted by jason at 12:35 AM No comments: